I whispered the poem of waiting (entezar) for ۱۵ years 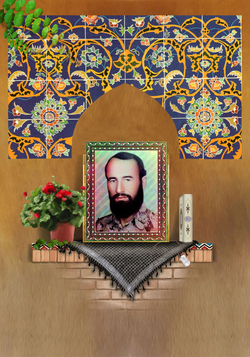 We have been waiting for his return for ۱۵ years when the search team announced that they had discovered his body. When he returned, a glorious funeral was held and he was buried next to his comrades in Golzar Shohada (the garden of the martyrs) of our village, which is called Behesht-e Mohammad.
Ashraf Fassihi Dastjerdi
Translator:Azadeh Fekr Azad

Javan online Sacrifice and Resistance Service: Martyr Mohammad Heidari Dastjerdi took part in Ramadan operation, when his wounds from Khorramshahr conquer operation had not yet fully recovered. He, who was the father of a young child, believed that until there was a war, we should be on the front lines. Mohammad Heydari, after several months in the operational areas, was martyred on October ۶, ۱۹۸۲ in the operational areas of Ramadan.
His body was discovered after ۱۵ years by an investigation team and was buried in Golzar Shohada, his birthplace, Dastjerd village, Isfahan. Martyr Heydari had a son named Ali. He was a fighter who was known among his friends as Shahid Chamran. You are reading our interview to Sakineh Khodami, the martyr's wife.


-How did your acquaintance with shahid originate?
Muhammad and I had a family relation. Muhammad was my cousin and there was a very close relationship between the two families. As far back as I can remember, my aunt proposed me to Muhammad, and he accepted. We were nominated in ۱۹۷۴. Our engagement period lasted for four years until we were officially married in ۱۹۷۸ and a year later our common life began.


-How many years did you live together?
We lived together for about two and a half years and the result of our marriage was two sons. Our first child died of an illness as a child before Muhammad was martyred. The second child is named Ali, who is now married and has two children.


-What was your husband's temper that led him to jihad?
Muhammad had no attachment to the material world at all. Despite his intense interest in our son, he preferred jihad for the sake of the truth and on March ۱۱, ۱۹۸۱, he registered to be sent to the frontline. He took training courses at Al-Ghadir barracks in Isfahan, and after completing the training courses, he returned home and we were together during the nowrooz holidays. On April ۶, ۱۹۸۲, he left for the operational areas of the south of the country.


-What operations did he take part in?
He took part in the operation Bayt al-Muqaddas, which led to Khorramshahr freedom. In that operation, he was injured in the chest. He was hospitalized in Shahid Beheshti Hospital in Shiraz and was released from the hospital after ۲۰ days and returned home, but before his full recovery he left again and this time he was martyred.


-Was he severely injured? How did he return to the front despite his injuries?
-Muhammad felt indebted to Iran and the revolution and could not be indifferent to what was happening on the front. After the conquest of Khorramshahr, there were whispers of another operation and he wanted to take part in it. For this reason, on July ۶, ۱۹۶۱, he went to the front again. One month later, on August ۶, he was martyred at the age of ۲۷ during the Ramadan operation in the eastern region of Basra, and his body disappeared. We heard about his injury that during the operation, a bullet hit him in the right shoulder and entered his chest. Muhammad knew that water was not good for injury, but because he was very thirsty, he picked up a flask of water and drank it completely. As a result, his wound bled and he fainted. Rescuers found him half-dead and took him to a hospital in Ahvaz. He underwent surgery there and was no longer anesthetized because he was unconscious. The moment the doctors tried to remove the bullet from his chest, Mohammad noticed and woke up to the sound of the bullet falling and said to the doctor: Was it an arrow or a shrapnel? The doctor said: I would tie it to your wrist to see what happened. We thought he would not return to the front after the end of his recovery, but he believed that we should go and defend the right as long as there was a war. At that time, one of his fellow citizens died of an electric shock. When Muhammad came at night and I told him that someone had died, he said that if something was to happen to a person, it would happen here, so I would go to the front until there was a war.


-How long was he missed?
-We have been waiting for his return for ۱۵ years when the search team announced that they had discovered his body. When he returned, a glorious funeral was held and he was buried next to his comrades in Golzar Shohada (the garden of the martyrs) of our village, which is called Behesht-e Mohammad.

-What lifestyle and moral characteristics did Martyr Heydari have?
-He was very conscientious, loving and warm-hearted. He had great respect for his parents and was very committed to family reunion. Another characteristic was that he was active and social and was constantly present in religious ceremonies. He was very sympathetic to his parents and helped his father when he was at home. Muhammad never hesitated in good deeds. He did not want anyone to be offended by him. He always first prayed on-time. I remember that in those years, the constructive jihad had a strong presence in the rural areas, and Muhammad also helped the people along with them. Martyr Heydari was so interested in Ali's name that he named both of our children Ali. When the first son passed away, Mohammad put his name on our second son. When his father asked why you put the name of your deceased son on this one, Mohammad replied, "I like name “Ali” very much, and if God gives me ۱۰ sons, I will name them all Ali. " I love hearing Ali's name.


-How did the waiting years pass?
-In one sentence: very difficult and perhaps only understandable to those who have experienced such separation. When I went to Golzar Shohada, all the families of the martyrs were sitting at the tombs of their loved martyrs, but I did no had no place to sit to recite Fateha and confabulate with my dear so that I could relax a little. Bewildered and amazed, I walked around the tombs of the martyrs and returned home with a broken heart and awaiting eyes. I was hoping for a sign of my missing martyr until, thanks to God, his pure body returned home after ۱۵ years. During the ۱۵ years that Mohammad was missing, I kept whispering this poem, which is a reminder of years of waiting.


-It seems that the martyr's friends called him Chamran? What was the reason?
-When Muhammad wore military uniform, he looked very much like Martyr Chamran. His stature and appearance were similar to Martyr Chamran. Everyone who saw him remembered Martyr Chamran. For this reason, he was nicknamed Chamran and was sometimes mistaken for Martyr Chamran.


-What memories of him remain in your mind?
-Once, an acquaintance told Martyr Heidari, "Mohammad Agha, you who are a fighter and a veteran, go and get household goods from the cooperative at a reasonable price. " When Muhammad heard that, he got very upset and said that I went to the front for the sake of God and to defend Islam, not to take a share. Muhammad did not want his jihad in the way of God be worthless, and all he tried to do was to walk sincerely for God, and thanks God, he was proud in this test.


-Most of the readers of our newspaper are young people, if possible please share the memories of your common life with our readers.
-Muhammad was very polite and always called me Hajj Khanum. One day my mother-in-law joked: It is not clear when your wife would become Hajiyeh Khanum! Muhammad replied, "I will send her on a pilgrimage soon. " At the age of ۲۴, three years after Muhammad's martyrdom, I went on a pilgrimage to the Mecca, God’s house, and became a Hajiyeh Khanum. There I remembered Muhammad and said, "Is that how you wanted me to become a pilgrim so that you can go to God yourself and send me alone to the God’s house?" You become the saints of God and I become a pilgrim to the God’s house? But you were a real man and loyal to your words and promise and finally you sent me to visit the God’s house.
Another memory is related to the time of our marriage and the trip we had to Tehran together. Before arriving in Tehran, by the grace of God, we went to visit Hazrat Fatemeh Masoumeh (PBUH). On the way back, we went to Qom again for pilgrimage and thanks God we went to Qom to visit Imam Khomeini. We visited him closely there. A large crowd had come and it was not long time since he had returned from exile.


-A part of the martyr’s will
May God accept this lowly soul from me. My dear mother and kind father, I went to the place where the lovers of martyrdom went. Be proud that you were able to raise such a child who has taken such a path; Do not cry and try to keep my honor to Imam Hussein (AS) , Fatemeh Zahra (AS) and Hazrat Mahdi (AS). The frontlines need warriors and we have to go. If we do not go to the front, we will not do our duty and the blood of other martyrs will be trampled. We all go to the lesser jihad which is fight with the enemy and you will practice the greatest jihad, which means jihad and fighting against the soul. I advise you to piety and faith in God.